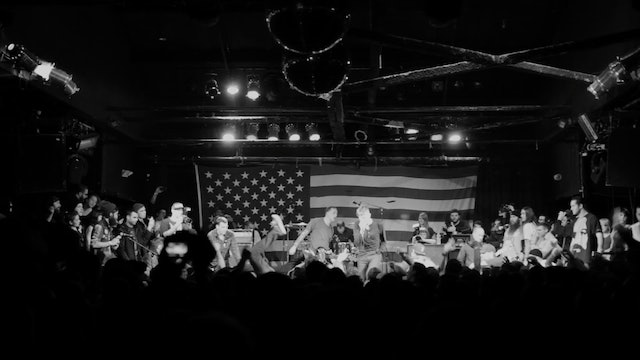 American Nightmare (Give Up The Ghost) are one of the most important and influential hardcore/punk bands of the last two decades. The band’s volatile mix of traditional American hardcore, English influenced attitude, and Wesley Eisold’s emotional lyrical prose set a new creative standard for the worldwide hardcore community. Their sphere of influence is far reaching, serving as the bellwether to the giants of punk (AFI, New Found Glory, etc.), metal/hardcore (Hatebreed, GlassJaw, Converge, etc.), and even mainstream music (Fall Out Boy, My Chemical Romance, etc.).

On December 29th and 31st, 2011, the last known incarnation of American Nightmare (Give Up The Ghost) reunited to play their first shows in almost eight long years. One in Boston and the other Los Angeles, these legendary shows were comprised of fanatic audiences who travelled from all over the globe. All to celebrate their intimate connection to the words and music of this highly influential band.

Years in the making, we are proud to present the official footage from these two historic hardcore shows in their entirety on 1080p BluRay and HD Digital formats. Both shows were professionally filmed and edited by Evan Henkel with additional editing by Ian McFarland (McFarland and Pecci Films). Documenting the unmatched energy and emotion that only American Nightmare (Give Up The Ghost) could emanate. Also featuring interviews with Matt Pike (Booking Agent), Chris Wrenn (Bridge 9 Records), Robby Redcheeks (Promoter), Jacob Bannon (Converge, Deathwish), George Hirsch (Blacklisted, Harm Wulf), and Jeremy Bolm (Touche Amore).

Right-click this and copy the link address.

Watch on your Television

Watch on your Computer